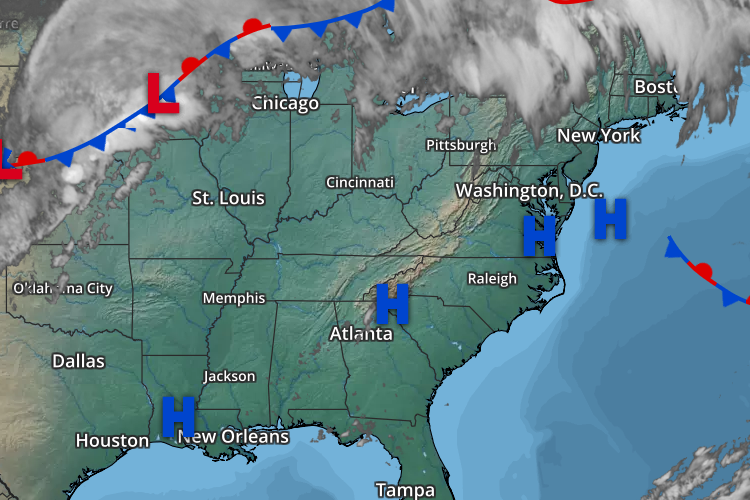 It was a sunny and warm today with temperatures across the area reaching the mid 80s. Temperatures tonight should drop into the mid 60s inland with low 70s on the Outer Banks.

The forecast hasn’t changed much from yesterday with the exception to the forecast high temperature for Friday. The entire southeastern US will remain under the influence of the large-scale ridge through Thursday. This will lead to above average temperatures on Wednesday with inland locations reaching 90 while locations near the coast reaching mid to upper 80s. Thursday will bring widespread record-breaking heat across the east. Inland locations could see temperatures reach the mid to upper 90s and coastal locations ranging mid to upper 80s. Deep inland areas could even approach triple digits on Thursday. While I am not comfortable bumping my forecast high temperatures to 100 at this time it still is a possibility. If this were July/August I would say 100 is easily obtainable but it’s October and a forecast high that is >5º warmer than the record temperature leaves me a little skeptical. A quick look at record high temperatures for October 3 from the region:
Kinston: 94
Greenville: 93
New Bern: 92
Jacksonville: 87
Williamston: 92
Washington: 87
These locations could see these record high temperatures broken on Thursday. In addition to these temperatures, dewpoints will rise into the 70s in these areas leading to a heat index in excess of 100.

The ridge begins to erode as a mid-level trough pushes a cold front through the region on Friday. As it looks now, moisture appears to be limited so rain is not expected at this time with the frontal passage. Forecast high temperatures are a little tricky and will depend on timing of the front. The GFS in today’s runs have been on the cool side of the model spread with the Euro and CMC both a bit warmer than the GFS. I am going with the Euro and CMC for the highs which both are on the upper end of the guidance range with upper 80s to 90 over the southern sections and mid to upper 80s north. It’s possible that changes to this forecast may need to be made if the front pushes through earlier than currently forecast.

This weekend should remain dry with high temperatures near normal (mid to upper 70s). Rain chances return next week. 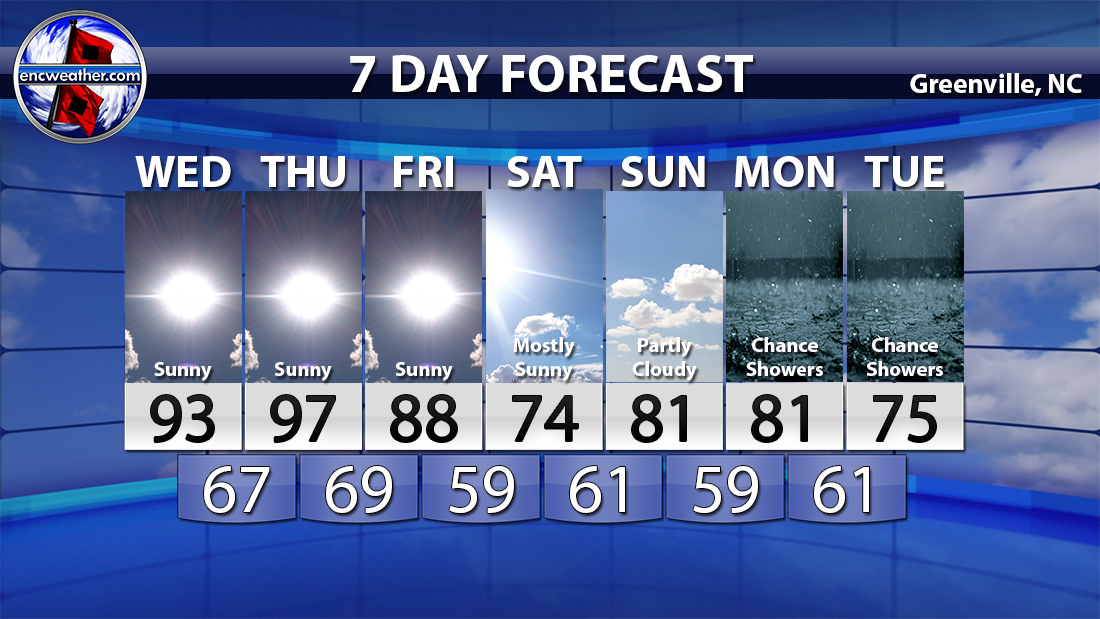 Another Chance at Rain on Wednesday

Near Record Temperatures This Week