Potential Tropical Cyclone Nine is current south of Puerto Rico moving WNW at 18 mph. This storm has yet to achieve the minimum requirements to become a tropical storm but is producing tropical storm conditions. 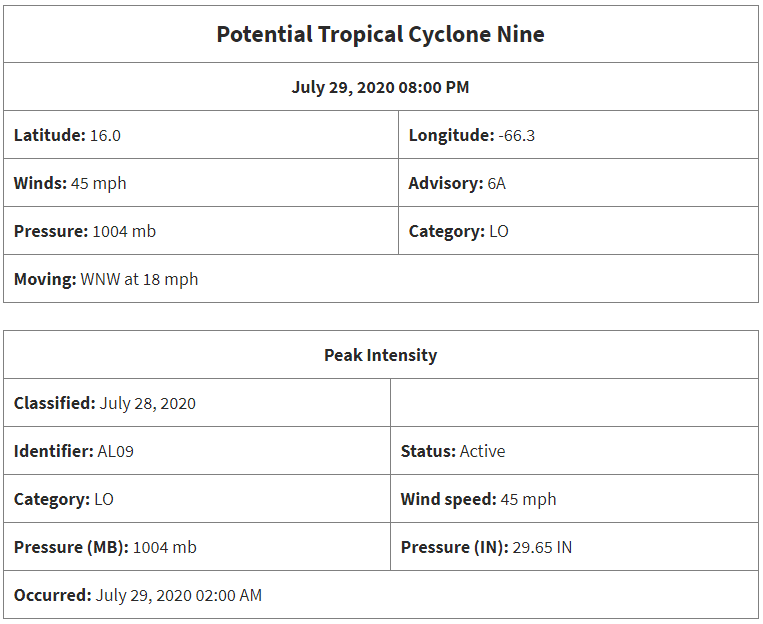 PTC Nine did not have a well-defined center of circulation as of the last advisory which is what we are waiting for before the system can be considered a tropical storm. When that does happen, which could occur in the next couple of hours, it will be called Isaias (pronounced ees-ah-EE-ahs). The earliest “I”named storm in the Atlantic was on August 7, 2005 (if you remember we ran out of names that year) which means if this storm does attain tropical storm classification it will become the earliest “I” storm in the Atlantic. 2020 has also set the record for earliest “C”, “E”, “F”, “G”, and “H” named storms and only one so far has been a hurricane.

We are seeing signs of the beginning of what could be the process of developing a well-defined center of circulation as convection is firing up on the southern side of the broad circulation. Conditions for the moment are conducive for some development but the storm will encounter a couple of barriers.

Whether the storm obtains a well-defined center of circulation or not, it will be interacting with Hispaniola which is a large barrier for the storm to encounter. The terrain of the island will cause some disruption to the circulation, so any intensification will be nearly impossible during its close passage to the island.

The track to the WNW will continue as it tracks on the southern portion of the sub-tropical ridge over the Atlantic Ocean. This will continue through Thursday and into the early part of Friday. The exact track will determine how strong the storm will get with a slightly southern track causing much more land interaction and therefore disrupting the storm which would lead to some weakening. Even with a more northern track, some land interaction will occur but not as much with the more southern track.

The storm would maintain its tropical storm status throughout the short-term forecast period and there is no indication that this will change over time.

Now, if you have been following the models and the NHC forecast track, you will see how much the forecast track of this storm has gone back and forth throughout the past couple of days. Model agreement is very low in this situation and solely relying on forecast models with this forecast is shooting a moving target. The quality of the forecast models are only as good as the data that in ingested. In this case, there isn’t a defined center of circulation which doesn’t help with initializing the run. Always be careful when seeing a posting on social media or other source displaying one model with a storm position seven-days out without understanding the context.

Sometime late Friday or Saturday, a trough over the central US will be weakening the western side of the sub-tropical ridge. The storm will begin to turn northwestward in response to this weakening. It is at this time the storm will be slowing down with very weak steering currents leading to greater uncertainty of exactly where it will begin moving northward. This is where the model divergence is so large and unstable. We have solutions extending as far west as the eastern Gulf of Mexico to the eastern solutions staying off the east coast. Given what we know now, all I can say is it is a wait and see scenario for locations along the southeast coast. 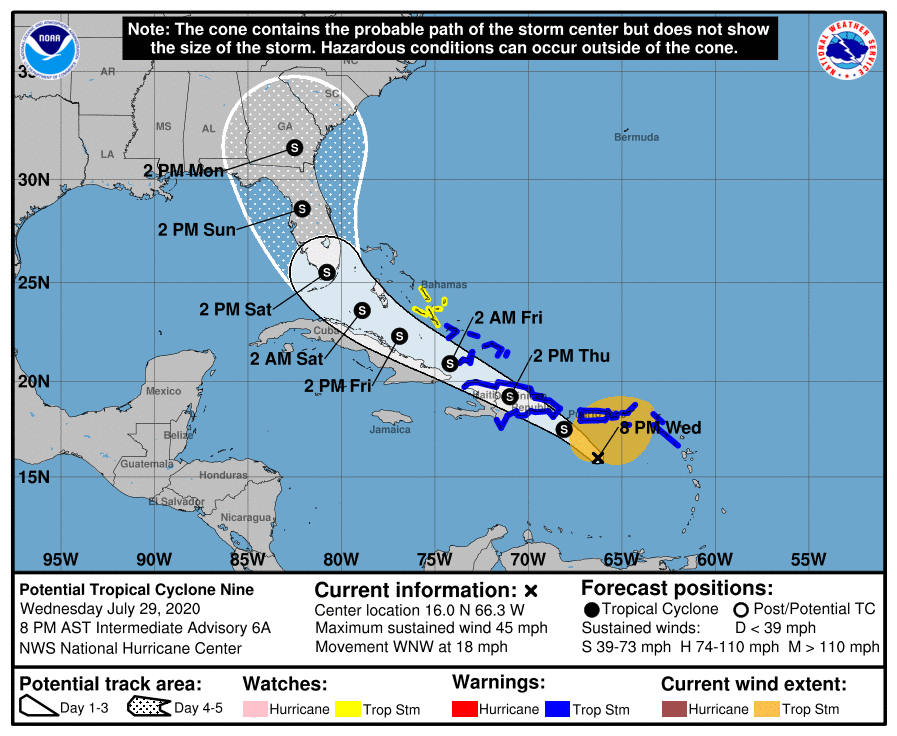 Right now its too early to say exactly what impacts this will have for ENC. It is important to pay attention to what this storm is doing and be prepared to act in the event there is an impact from this storm. The time frame will be determined by its eventual track but probably at the earliest, sometime around Tuesday or Wednesday would be the time-frame to watch.

I usually say the following disclaimer with my posts but I don’t feel like typing the same thing over again so I am only going to post this once. I am not a professional meteorologist. I rely on my education in Atmospheric Science and having pursued the topic for most of my life. Statements made by me on this website are only my opinion and my interpretations from the data I am reviewing. All life and death decisions shouldn’t be made based on the information on this website. Always consult official sources of weather information from the National Weather Service or local authorities.