Update as of Wednesday morning:

As of early Wednesday morning, Hurricane Michael has strengthened to a very dangerous category 4 hurricane off the Gulf Coast of Florida. Michael is expected to maintain category 4 strength (or even strengthen some more) up until landfall later today. Rainbands are already moving inland over the Florida Panhandle with the core of the storm well off the coast.

Update from the NHC:

Afternoon Update: Hurricane Michael has made landfall between Panama City and Beacon Hill, Florida. Wind speed reports show wind gusts in excess of 100 mph with the highest report being 129 mph. There will probably be more reports of actual winds speeds once the core of the storm has passed.

For ENC, the forecast remains the same as yesterday. Tropical Storm Watches have been issued for every county in ENC as tropical storm force winds gusts can be expected as Michael races northeastward over the area.

On Wednesday, we can expected to see scattered showers associated with moisture arriving ahead of Michael. Rain should hold off until the afternoon hours for most areas. Some of these showers could produce locally heavy rain.

There could be a lull in precipitation on Wednesday evening before the arrival of Michael on Thursday. It is important to note that the rain on Wednesday is not associated with Michael. 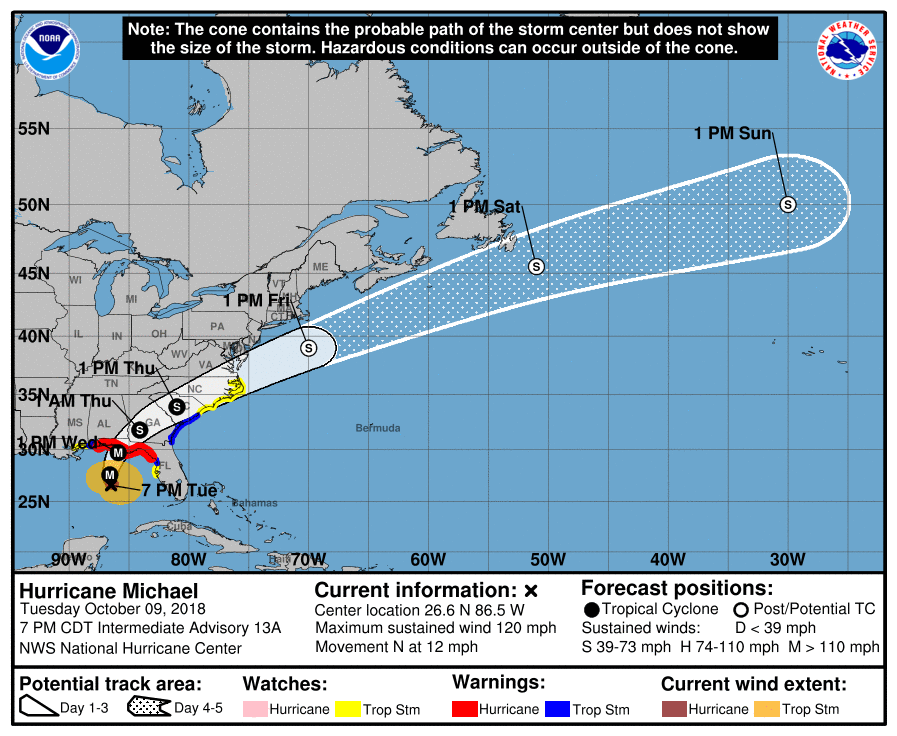 After making landfall, Hurricane Michael will begin to weaken as it moves northeastward over land. Michael is forecast to be a tropical storm as it passes through NC with much of the area experiencing tropical storm conditions. The National Weather Service in Newport/Morehead City has issued a Tropical Storm Watch for the entire area which could be upgraded to a Tropical Storm Warning tomorrow. For up-to-date information about whether your area is under a watch or warning, please visit the Raleigh, Wilmington, and Wakefield WFO websites. The Newport/Morehead City WFO is also in the area.

By Thursday afternoon, rainfall associated with Michael will being to move over the area. As the center of Michael begins to pass through the area, winds will increase with potential gusts reaching tropical storm strength. Probabilities for tropical storm force winds for the area now exceeds 70% and winds in excess of 58 mph are now around 40% for the area. *Wednesday afternoon update: The probability of tropical storm force winds over the area has returned to 60-70% after dropping lower this morning.* With the ground already saturated by the rain on Wednesday and the weakened trees from Hurricane Florence, wind damage to trees could result in power loss in some areas. Damage to porches, awnings, carports, sheds, and unanchored mobile homes can be expected. Roads could be covered with debris and become impassible in spots. 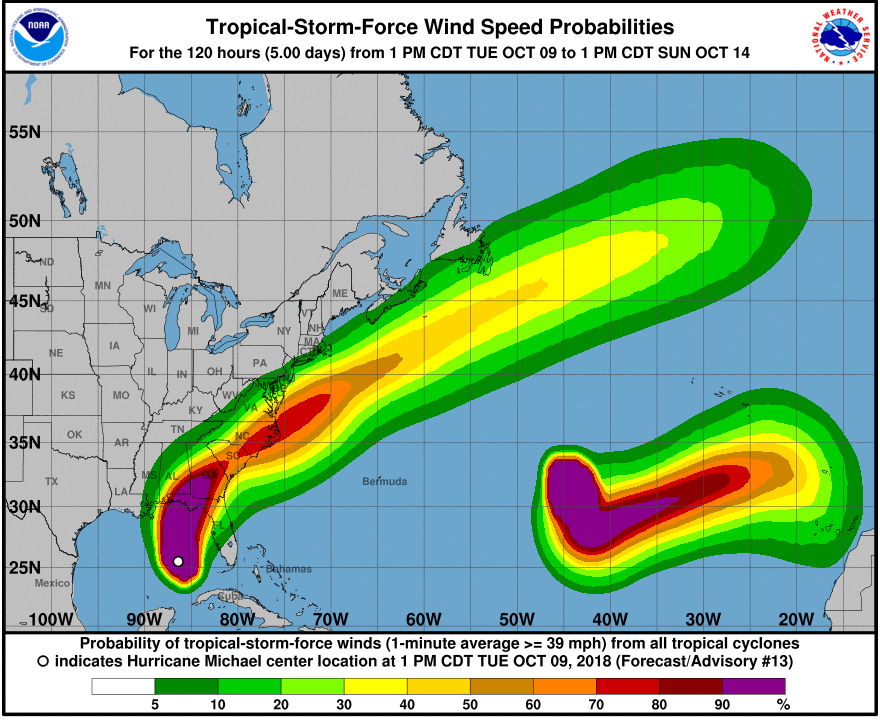 Heavy rainfall can also be expected from Michael on Thursday and Thursday night. Current forecast calls for 4-6″ over central NC (where the heaviest band of rain will setup), to 2-4″ over the coastal plains, and the coast only seeing roughly 1-2″ of rain. River flooding will depend on the amount of rain that falls and where it falls. Since Michael will be moving through the area much faster than Florence, we do not expect to see the widespread flooding event that occurred over the past couple of weeks.

An isolated tornado is possible for our area on Thursday/Thursday night.

The storm is forecast to move away from the area on Friday with cooler weather filtering in over the weekend.