Hurricane Michael made landfall earlier today near Mexico Beach, FL with estimated maximum wind speed at landfall around 155 mph. As I made note in my other post, some of the recorded wind speeds that have been able to be reported showed wind gusts reaching as much as 129 mph. There was another report of 116 mph gusts. Other areas reported speeds around 80-90 mph. We will have more detailed reports in the coming days. 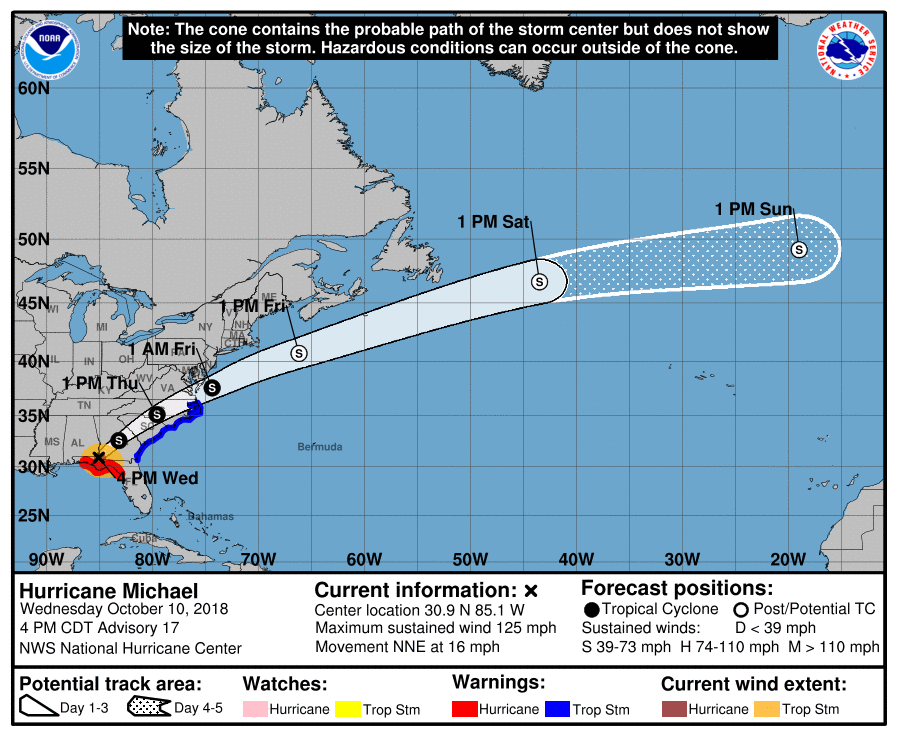 Over the past 24 hours the forecast track has shifted westward now bringing the center of the storm just to the east of Raleigh and exiting the coast over Virginia Beach. Impacts of such a track will have potentially serious consequences for ENC which I will detail.

Michael is over land now and is forecast to weaken as it approaches the Carolinas. The speed at which Michael is moving will do very little in weakening the storm at a normal rate, meaning Michael is still forecast to be a tropical storm as it passes over our region. Forecast winds and wind gusts are expected to be near tropical storm force over much of ENC. In fact, Tropical Storm Warnings have been expanded westward over central NC. This track places all of ENC in the right side of the forecast track where the winds are normally stronger in moving tropical cyclones. Tropical storm force wind speed probabilities are now in the 50-70% range. 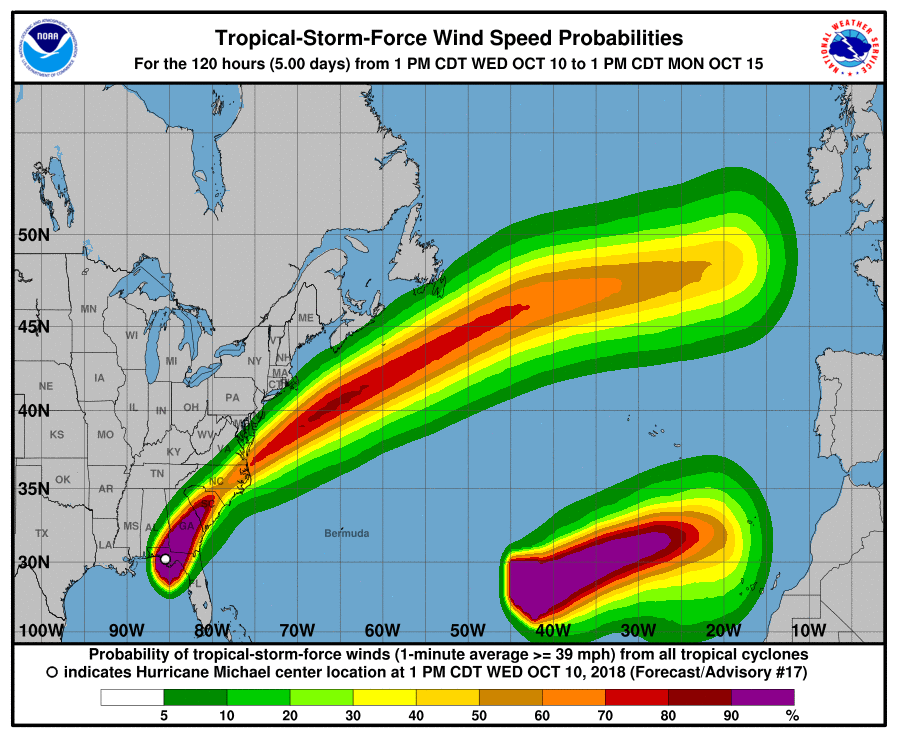 The slight shift westward will keep most of the heaviest rain confined in central NC where areas could see 4-6 inches with locally higher amounts. Inland sections of ENC can expect to see 2-4 inches and coastal sections roughly 1-3 inches. Flash flooding is a concern for areas that could receive locally heavy rain but most of the heavy rain should remain to the west of us.

Thursday Noon Update: Removed threat of river flooding as river levels are long longer forecast to reach their flood stage. All flood warnings for river flooding has been cancelled.

Isolated tornadoes could also be possible for areas east of the forecast track. 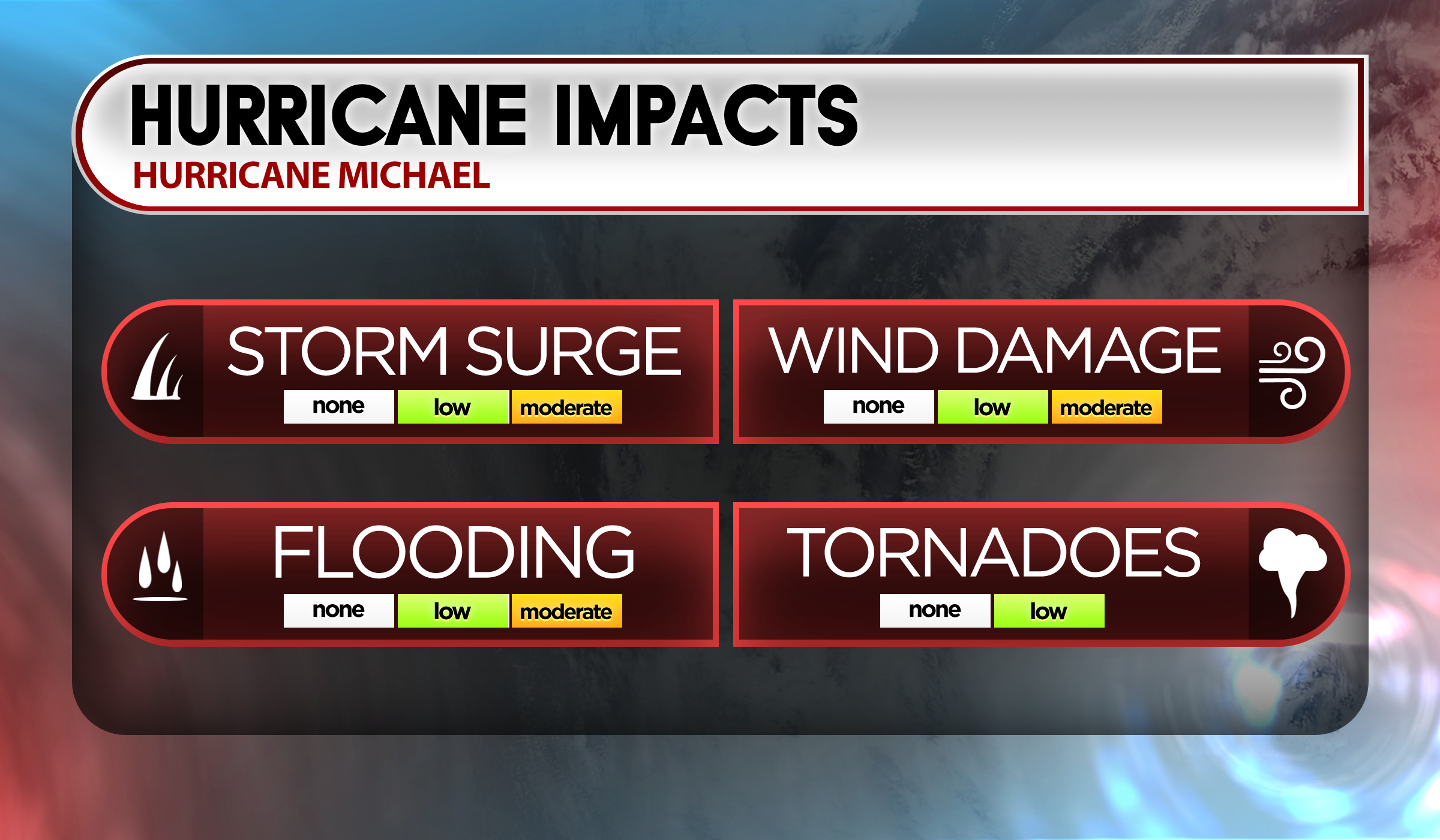 Michael will be a high impact system for the area on Thursday/Thursday night. By 11:00AM Thursday, rain should be entering our southern counties with increasing winds as well. The rain associated with Michael will move through the area from the southwest to northeast through the early afternoon. By mid-afternoon, winds will increase as the core of Michael begins to move through the central part of the state. Wind gusts will also begin to reach tropical storm force across the entire area by late afternoon and into early evening. Rain/strong winds will come to an end from southwest to northeast around 8:00 PM for southwest sections to 2:00 AM for the extreme northeast sections.