Tropical Depression 13 has formed in the Atlantic with maximum winds of 35 mph. The storms if forecast to continue on a west-northwest track on the southern portion of the subtropical ridge over the Atlantic Ocean through the weekend.

Currently TD 13 is still disorganized as it battles dry air to its west and moderate wind shear as it continues track WNW track. There is still a lot of uncertainty in terms of strength and track. Environmental conditions become more conducive for development but other factors will come into play. High pressure to the north will continue to build westward north of the storm which will keep it on a WNW track through the weekend. The issue is how far south it travels as it passes north of Puerto Rico and Hispaniola. Even with favorable mid-to-upper level conditions, land interaction could limit any strengthening during this time-frame. However, if the forecast track is further north, we could see more strengthening as land interaction will be less of a factor. Until the storm becomes better organized there could be shifts in the track which could impact the long-term forecast.

As we head into the beginning of next week, the storm is forecast to be near the Florida coast. If this storm has taken a more northern track, we could see a potential hurricane at the time the storm approaches the southeast coast. If the storm takes a more southern track, we would have a much weaker system by the time it approaches the southeast coast. The NHC has the entire state of Florida in the cone on day 4 and 5 though the cone could move eastward or westward in future updates so interest along the southeast coast should continue to monitor this storm through the weekend. 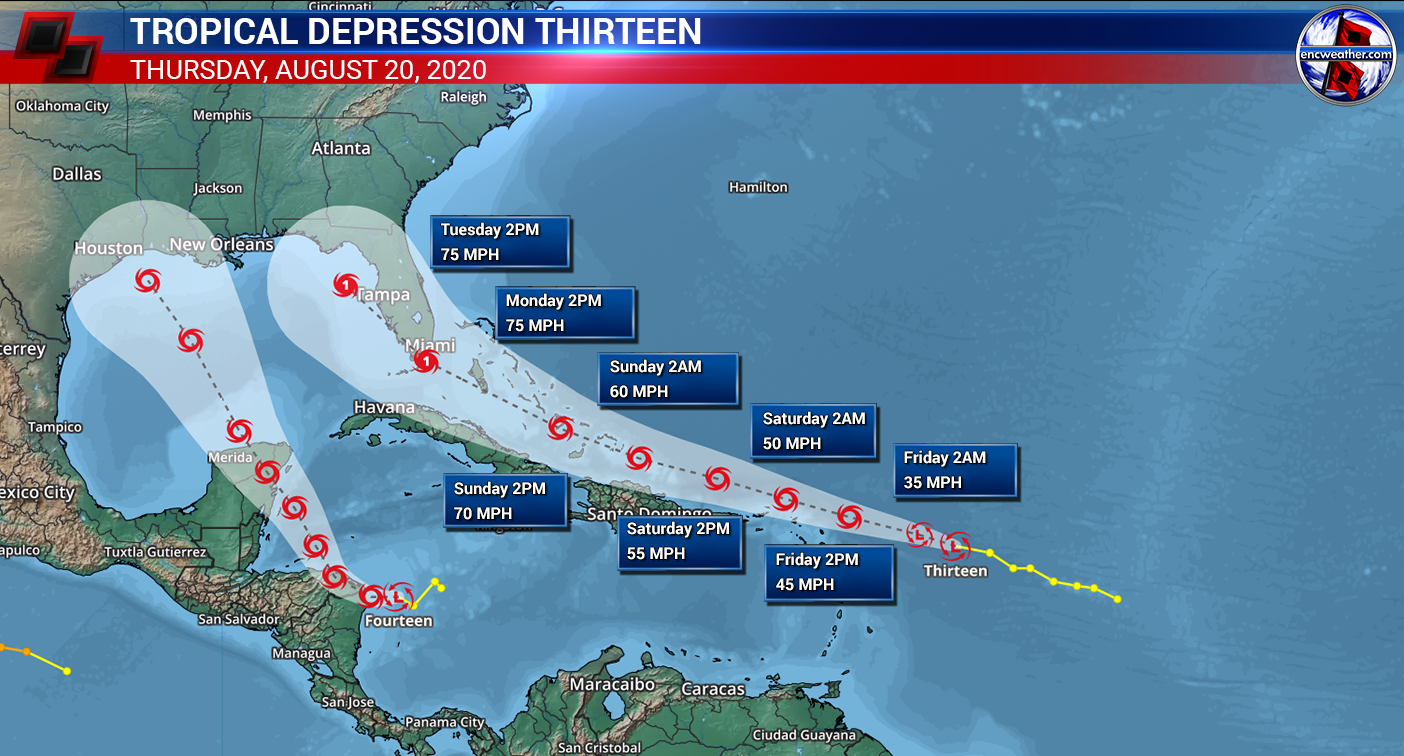 Tropical Depression Fourteen which also formed today could potentially be impacting the US at the same time as Tropical Depression Thirteen. Fourteen’s struggle will be more difficult than Thirteen. Along the forecast track, there will be significant land interaction with Central America through the weekend. The storm should remain a tropical storm through this process but exact strength could vary during this time. Once it emerges off the Yucatan Peninsula into the Gulf of Mexico, it will begin to enter into a region of increasing shear limiting strengthening before landfall along the Gulf Coast. Current NHC forecast it as a tropical storm at day five though this could change before that time. We will need to continue to monitor the storm through the weekend as this storm continues to develop.

I will have a more detailed forecast this weekend on both of these storms.